On Tuesday, October 18, 2016 The Patrons of the Arts in the Vatican Museums in conjunction with The Permanent Observer Mission of the Holy See to the United Nations and Solares Federazione delle Arti hosted an evening at The United Nations Headquarters ECOSOC Hall.

The New York Patrons, the International Patrons, and esteemed guests gathered in the ECOSOC Hall to see the New York City premiere of The World’s Smallest Army directed by Gianfranco Pannone. The film transports viewers inside the Vatican and into the lives of the men serving in the Pontifical Swiss Guard-the famously clad army founded in 1506 to protect the Pope. The film documents a year in the life of two new recruits as they took up service together in the eternal city. Pannone’s documentary illuminates how the modern day Pontifical Swiss Guard bridges 500 year-old traditions with contemporary culture, specifically serving a Pope who regularly interacts with the people and seeks to bring the Christian faith to the modern world.

The evening ended with a short panel discussion and audience Q & A. The discussion was led by  Former Captain of the Pontifical Swiss Guard, Frowin Bachmann, Director of the Patrons of the Arts in the Vatican Museums,Fr. Daniel Hennessy, Director of The World’s Smallest Army, Gianfranco Pannone, and Director of The Permeant Observer Mission of the Holy See, Fr. Landry. 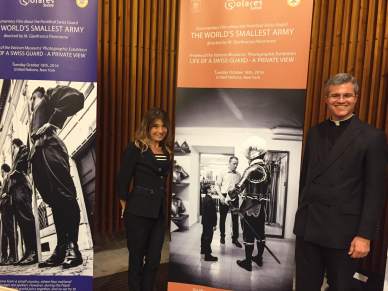