Room  of Constantine,  1517-1524.
This specific project will provide for the preliminary studies that will establish
a time line and a working plan for the monumental restoration of the frescoes. Of all the projects proposed, this is probably the most significant for its artistic, symbolic and historical value. Decorated by the school of Raphael from his cartoons, the Sala di Costantino symbolizes the triumph of Christianity over paganism and the establishment of the Church in Rome. The frescoes illustrate the various historic events surrounding the Emperor Constantine which lead him to officially cease the persecutions of the early Christians and establish freedom of religion in the Roman Empire through the Edict of Milan, whose 1700th anniversary fell in 2013.

The Room of Constantine was originally one of the rooms of Pope Julius II (della Rovere, 1503 to 1513) and Pope Leo X (de Medici,1513-1521). It is located  in the Apostolic Palace, between the room of the Chiaroscuri and the Room of Heliodorus. The Room of Constantine takes its name from the series of paintings depicted on its walls; the program of these paintings includes episodes from the life of the Roman Emperor Constantine the Great (306 – 337) with the intention of enhancing its divine providence, of bolstering the Church’s claim to Rome and the Roman Empire.

This large room is on the second floor of a building with several floors, built in the period between the last decades of the thirteenth century and the end of the Avignon captivity (1309-1377), between the oldest eastern wing formed by the medieval palace of Nicholas III (1277-1280) and the most recent northern wing, the fifteenth-century palace of Nicholas V (1447-1455), where there are now the Raphael Rooms. The Room of Constantine is located precisely above the Borgia room of the Popes. In ancient documents, the two rooms were referred to as aulae Pontificum, likely due to their matching décor of canonized pontiffs. The present layout of the Room of Constantine resulted from renovations by Pope Leo X, who wanted to utilize the hall for representations, including receptions and banquets. Between 1518 and 1519, Leo X commissioned Antonio da Sangallo the Younger to cover the room with a coffered ceiling; in the spring of 1519, he commissioned Raphael to decorate its walls.

Leo X requested that Raphael complete a cycle of frescoes that— within tapestries of rich, bordering foliage – represented four episodes of the life of the first Christian emperor, Constantine. Unfortunately, due to his premature death in 1520, Raphael only completed original cartoons for two of these frescoes—the Apparition of the Cross to the Emperor and the Battle of the Milvian Bridge Against Maxentius. Out of respect to their late master, Raphael’s students replaced the remaining two stories of Constantine with two different episodes : Baptism of Constantine and the Donation of Rome to Pope Sylvester . The total iconographic program aims to enhance the victory of Christianity over Paganism; frescoes depicting the Baptistery of San Giovanni and the initial commission of the old St. Peter’s Basilica emphasize this victory by illustrating Constantine’s role in the foundation of the Church in the city of Rome.

The great painter of Urbino designed the entire decorative scheme of the room. In addition to the large fresco cycles, a series of figures embellish the room. Surrounding the main scenes, Raphael depicted figures of saints, popes seated in false niches, and allegorical virtues; below each cycle, the artist displayed monochrome panels with caryatids and other stories from life of Constantine.

By the time of his death in 1520, the artist had already fully designed the two large frescoes of the Battle of the Milvian Bridge and the Apparition of the Cross as cartoons. Also, it is likely that the room’s southern wall was ready to be painted and that Raphael had already completed the allegorical figures of two Virtues: Justice and Meekness. Despite the attempt of Sebastiano del Piombo , who—with the support of Michelangelo—had hoped to take over the prestigious task of decorating the room after Raphael’s death, Leo X chose to entrust the rest of the job to the workshop of Raphael, mainly, Giulio Romano and Giovan Francesco Penni , because they had the original drawings and cartoons of the master and would be able to complete his intended designs.

After the death of Leo X the following year, the disciples of Raphael had decorated more than a half of the room, completing Battle of the Milvian Bridge and the Apparition of the Cross. 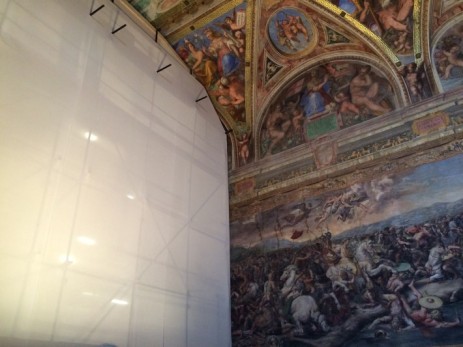 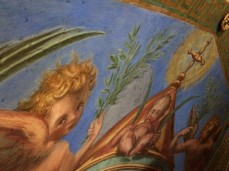